A bright and lush area painted in the warm colors of autumn.

Autumn's Rise is a location in CrossWorlds. It is a large, forested area crisscrossed by rivers where it appears to be permanently autumn. This is the first area Seekers explore when they exit Rookie Harbor.

Autumn's Rise stretches in a roughly east-west direction between Rookie Harbor and Bergen Trail. The halfway point of the area is Obelisk Lake, where a large obelisk serves as a waypoint and hosts a small group of traders. In the southwest stands a mysterious abandoned observatory. To the north is a small guild village known as Autumn Residences.

Most of the area can be accessed immediately, with the exception of Autumn Residences, which is unlocked when you meet the First Scholars after reaching Bergen Village, and the Inner Observatory, which is opened during The Observatory.

The regions adjacent to Autumn's Rise are Rookie Harbor via Entrance, Bergen Trail via Ending Pathway, and Autumn's Fall later on via Normal Clearing. 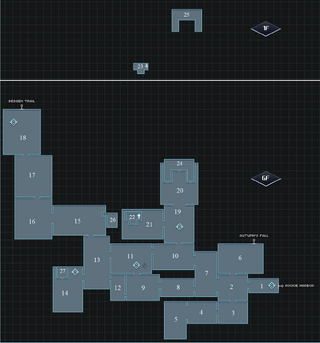 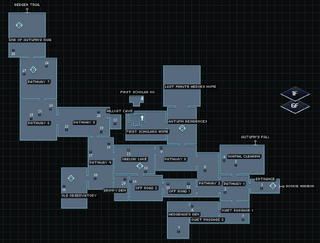 A small group of traders is located by the obelisk in Obelisk Lake.

The quests that can be started in Autumn's Rise are:

In the Hedgehag's Den area, defeating all enemies will cause the Blue Hedgehag miniboss to spawn. Defeating this enemy is necessary for the A Promise is a Promise sidequest.

The Autumn's Rise Observatory is located in the area. It can be accessed in the last part of the quest chain A Promise is a Promise.

There is a Perfectly Ordinary Tree located in the Normal Clearing area. Its presence is completely irrelevant. There seem to be similarly shaped things in different regions.

The Drippy Den is a hidden cave area accessible from Pathway 4 and Off Road 2 by jumping across the water.

To the south of First Scholars Home, there is a sign that can only be reached through long jumping or other exploits. The sign reads "There's no easter egg here".