This page is for the lore surrounding Avatars, for the enemy variant, see Avatar (enemy).

Avatars are the constructed bodies used by players of CrossWorlds to interact with the world around them. 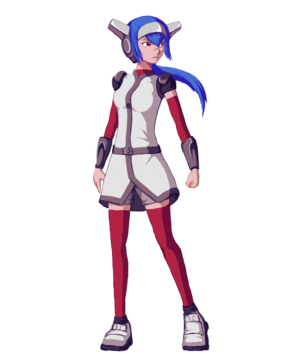 Avatars are made from Instant Matter. This allows them to be manipulated by the code of CrossWorlds, or destroyed and re-initialized elsewhere, essentially allowing teleportation. As the avatars have to be linked with the minds of their player, a large amount of complex background code is required for an avatar to function properly, as demonstrated by the great difficulty Sergey has hard-coding words into Lea's avatar.

Avatars are generally superficially identical to real humans. However, they can usually be distinguished by the outlandish hair colors and class-based armor which they typically sport. There is at least one case of a decidedly non-human avatar, with the Blue Avatar being blue. The appearance of avatars is selected by their player (or in Lea's case, Sergey) during character creation, and may have no relation the player's actual appearance.

Avatars have a weakness to water, and on falling into it they dissolve, but CrossWorlds is programmed to cause them to respawn in this case, albeit with a loss of health. This only applies to large volumes of water, as Lea's avatar has been in the rain without experiencing any problems. Avatars can also be damaged by conventional means. In this case, the damage is not accounted for in CrossWorlds and can negatively affect the avatar's appearance and functionality, as seen when Captain Jet used a rocket launcher against the Blue Avatar.

By being coded into the game, avatars are able to see the virtual elements of CrossWorlds without the VR goggles that real humans need to use. They are also able to use a wide range of virtual Combat abilities and arts, which understandably only affect the virtual and instant matter game elements they are programmed to. In some cases, avatars are even able to create instant matter entities without a programming interface, as with the Hexacast class-based summoning abilities, or the Blue Avatar summoning Shredders, Bosses and instant matter walls.