The Blue Hedgehag is an organic boss in CrossWorlds. It can be encountered in Autumn's Rise as part of the quest A Promise Is a Promise.

The Blue Hedgehag is a small, four-legged creature with dark grey skin and a back covered in bright blue spines. It also appears to have three red eyes.

The Blue Hedgehag is a substantially stronger version of the Hedgehag and Old Hedgehag, as it uses upgraded versions of their attacks, but bahaves mostly the same way. Once engaged in combat, the Blue Hedgehag will attempt to follow and stay close to Lea. It is able to use two attacks: a dash attack, in which it rolls quickly in a straight line at Lea twice in rapid succession, and a jump attack, in which it follows its target while it makes one huge leap and attempts to land on them. Both attacks are led by a brief period of spinning (and bouncing, in the case of the jump attack) during which the Hedgehag takes reduced damage. When it has been reduced to half its original health, the Blue Hedgehag will no longer use the first two attacks, but will use a new attack, in which it charges up for a few seconds and then makes a very long dash towards its target, dealing damage on contact. Unlike its weaker counterparts, Perfect Guards do not stun it. Its first two attack can be stopped with an attack like Sphere Saw, but its last attack can't be broken this way. 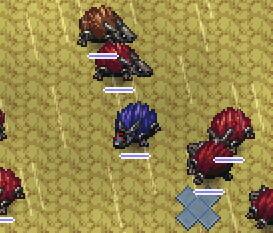 The Blue Hedgehag is very powerful compared to the other enemies at this stage of the game due to its very high health and damage. Due to its high damage, its attacks should be avoided if at all possible. The dash attack can be avoided fairly easily by dodging sideways. However, it is advisable to run away from the jump attack as it has a long range, since it's fairly difficult to dodge within its range. It is also recommended to fight it while Emilie is in the party, as some attacks will be aimed at her.

The Blue Hedgehag was introduced along with Autumn's Rise in the first version of the Demo. It has appeared in all subsequent versions of the game except the Shortened Demo. Previously, it could also be encountered as part of the Enemy Rush in the Old Observatory, but this has been removed.