Overgrown by a gigantic tree, this temple is guarded by an ancient entity.

Grand Krys'kajo is a location in CrossWorlds. It is a temple in the middle of Gaia's Garden which is built in and around the giant tree known as Gaia. This is the final of the jungle's three temples, in which the Shock and Wave elements must be used together in order to progress.

The name is also used to refer to the entire group of 3 temples, including the Zir'vitar Temple and the So'najiz Temple.

The temple has six floors, including a sublevel and four upper levels. The path to progress through the temple is as follows:

The only connected area is Gaia's Garden, via Entry Test and a teleporter in Seeker's Conclusion. 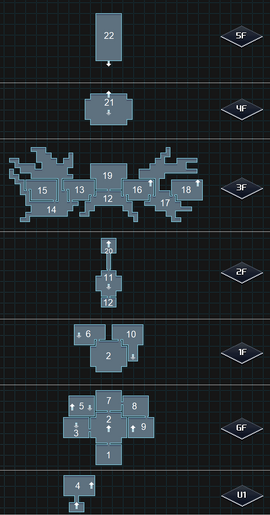 Unlike most dungeons, the Grand Krys'kajo lacks any respawning enemies, but all non-boss enemies encountered here can easily be found elsewhere.

The Grand Krys'kajo serves as a test of mastery over the elements Shock and Wave. The temple is watched over by a caretaker of the Track, Son of the East. This is the penultimate dungeon of the Track, although several smaller challenges separate it from the final dungeon, Ku'lero Temple. Seekers who prove their mastery here are awarded the

Star Shade. For completing the Temple, Seekers are rewarded by Di'aro, who extends their SP bar to 12 SP points. The Trackwalker General gives them an additional reward of two

Lea reaches the Grand Krys'kajo together with Emilie, C'tron, Apollo and Joern. After C'tron and Joern decide to log off for the day, the other three players race through the dungeon. Apollo always comes first, and reveals that he has played through CrossWorlds before. Lea can beat Emilie if she takes less than 30 minutes after the dungeon's midpoint. After the players reunite and visit the heritage site, they log off. After logging back in the next day, Lea encounters C'tron as he finishes the dungeon, and the two have a conversation about the stars.

In the A New Home DLC, Lea and C'tron return here to look at the stars again, in the hopes that this will help recover C'tron's memory. The sight causes him to remember something important, after which he quickly flees...