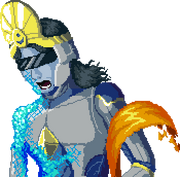 Instant Matter is found in gaseous form in the atmosphere of the CrossWorlds Moon. It can be caused to solidify by the code of CrossWorlds. Solid Instant Matter is controlled by CrossWorlds, and can therefore be made to interact with the virtual elements of the game, such as reacting to damage from virtual attacks. Solid Instant Matter is known to dissolve on contact with large quantities of water. It does survive in the rain, but this may be because the game is capable of regenerating the relatively minor damage fast enough that it is not noticeable.

Instant Matter can take on a wide variety of appearances and colors. In the rare cases where it is damaged to the point of not being directly controllable, its default appearance is shown to be a bright blue crystalline substance.

Instant matter is described in-game to be extremely light, with an avatar weighing in at about 15 pounds.

Several CrossWorlds elements have not been explicitly stated to be Instant Matter, but this can be assumed as they interact with both regular matter and virtual constructs. Destructible cubes and the shield blocks summoned by the Blue Avatar are both Instant Matter, and it is likely that other destructible objects are too. In addition, Items seem to be situationally represented as Instant Matter objects.

Carla is shown using a tablet to create stairs out of Instant Matter. It isn't clarified if the tablet is a CrossWorlds interface or if it is directly controlling the Instant Matter.

Jet uses a Neutralizer to remove all traces of CrossWorlds from the M.S. Solar. The device causes all nearby Instant Matter to dissolve.

This article is a stub. You can help CrossCode Wiki by expanding it.
Retrieved from "https://crosscode.fandom.com/wiki/Instant_Matter?oldid=10758"
Categories: