The M.S. Solar, also known as the Cargo Ship, is a location on Raritan Gem. It is a solar-powered cargo ship owned by the maintenance staff of CrossWorlds and captained by Captain Jet. It is a Solar Cruiser A590P, a smaller ship of the Solar class. This where Lea's avatar is first initialized, and where she undergoes basic combat training.

The M.S. Solar has a large open deck where cargo is stored, along with a below-deck cargo hold which is currently converted to a training course for Lea. There are three upper levels: two levels of crew quarters and the bridge. The levels are connected by a large freight elevator.

As this area is a ship, there are no permanent connecting areas. There is a one-way teleporter which is calibrated to point to Newcomer's Bridge. Later on, this becomes a proper landmark that Lea can warp to.

In the in-game map, the location is referred to as "Cargo Ship". 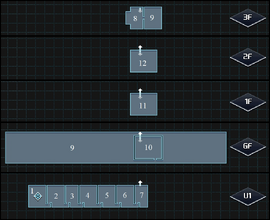 A number of plot-related enemies can be fought here. All of these enemies only occur during the course of the plot, and none of them respawn.

Sergey uses the M.S. Solar as a safe area outside the Playground to first bring Lea online. When she first spawns in, she is greeted by Sergey and Carla, and then led through an obstacle course set up in the cargo hold, during which she learns the basic abilities of playing CrossWorlds, and has her Balls, Charged Shot, Dashing and Melee unlocked. After, she meets with Captain Jet, and is told about CrossWorlds and her situation. After exploring the ship and cleaning up some boxes for the Fanboy, she is given a combat lesson by Jet, during which Sergey unlocks her Guarding ability. However, the lesson is interrupted by the arrival of the Designer, who seems to recognize Lea and makes her fight a Huge Hostile Crab. After the fight, Jet comes to the rescue, hitting the Designer with a blast from the Solar Fist and damaging his Avatar. This gives Lea the opportunity to flee, with Sergey sending her off to the Playground and Jet then removing all Instant Matter from the ship with a IMF Neutralizer, including the Designer.

Lea returns to the M.S. Solar after Jet rescues her from Vermillion Wasteland. Sergey gives Lea, Carla and Jet an explanation about Lea's past. Lea is then taken away by the Fanboy, who uses her as a test subject to demonstrate the capabilities of Avatars to the other crew members, with Lea meeting Isabelle during this demonstration. Lea logs off after this, and then returns to the Playground the next day.

During the A New Home DLC, Lea briefly visits the M.S. Solar to reunite with Carla and Jet.

Later in the DLC, Lea again returns to the M.S. Solar with Emilie and C'tron in preparation for infiltrating Vermillion Wasteland. Jet collects the three of them and carries them to the Wasteland by jetpack.

Visiting Carla's room during the start of the game will have Sergey remark on how messy it is, in sharp contrast to Jet's typically spotless ship. Carla will refuse to give an explanation, and Sergey will vow to find the reason.

During the A New Home DLC, if Lea visits the Ground Floor Elevator, she can meet with Isabelle, who has adopted Gautham's cat, Leim. She lets slip that Jet is afraid of water. If Sergey had previously learned of Carla's secret, he will confront her with this information, forcing her to admit that Sergey overlooks her messy room in exchange for her keeping his fear of water a secret.

The Shredders encountered during the escape sequence are normally intended to be undefeatable. While playing on New Game Plus with Sergey Hax (or Keep Level and a very high level) it is possible to defeat them, which triggers special reactions from the Designer but only grants a small amount of EXP. It is technically possible to kill them even in the main game, by trapping them in a situation where they are unable to attack Lea, but it takes nearly an hour to do so with Lea only dealing a single point of damage per hit.

A crewmember in the 3rd floor cabins can be observed playing a game. The game shown is Velsarbor, an older unfinished game by some of the Radical Fish Games members.