A dusty and barren area where only the fittest survive.

Maroon Valley is a location in CrossWorlds. It is a large, dry, hot desert area that has multiple chasms and an oasis.

Maroon Valley is located in between Ba'kii Kum and Bergen Village. You can get there by leaving Bergen Village to the west. The area itself is complex and full of puzzles, with many areas being difficult to access. On the map below, the main path through the area is 1-2-3-4-(8/10)-9-11-14-15-17-18. All three other loops can only be unlocked in one direction (forward for the Maroon Oasis, and backward for the other two), and require completing numerous puzzles to proceed. River Cliff/Endless Pit in particular requires you to start in Barren Land and follow an upper, puzzle-filled path through Overpass to reach the areas.

Cursed Coin to reach. The secret lab is PC-exclusive, and is unlocked during Best in the West. The Temple Entrance is only accessible once the Faj'ro Temple is unlocked, and the Faj'ro Roof is reached after the temple is completed. 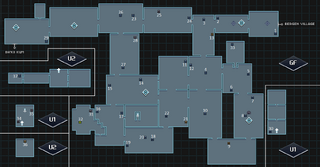 There are 17 types of botanic destructibles found in Maroon Valley.

A small group of traders can be found at the start of Maroon Valley.

The quests that can be started in Maroon Valley are:

There is no Cow Level
Visit the Perfectly Normal Cactus in Long Piece.
They have 5 Hearts
Defeat Ti'im.
A cursed Booty
Defeat the Cursed Sharkster.
Showdown at Faj'ro
Win the second PVP battle against Apollo.
True Spheromancer
Win the second PVP battle against Apollo without losing a single round.
Maroon Landmarks
Find all landmarks in Maroon Valley.
Maroon Scavenger
Obtain all chests in Maroon Valley; see #Chests.

Cursed Coin in Ba'kii Kum, you can access the Cursed Temple and fight the Cursed Sharkster. This boss fight is required for the A Promise Is a Promise 3 quest, but can be completed without the quest.