The planet Shadoon is populated by a wide range of colorful and interesting characters. They give advice and information to the Seekers who arrive to follow the Track of the Ancients. They man shops and trading booths, reward players for assistance and generally make the world a more lively and interesting place. They are CrossWorlds NPCs.

Like Avatars and Monsters, the NPCs of CrossWorlds are made of Instant Matter. They are controlled by a simple AI that allows for limited interactions with players. Many players remark that the responses of the NPCs are not very varied, and several sidequests show them interpreting Lea as saying something relevant to the quest, despite her inability to do so. Despite this, to the casual observer the NPCs appear to be real life humans. 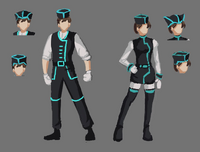 Unlike the majority of NPCs, who represent villagers and inhabitants of Shadoon, the Advisor NPCs are connected to Operation Trackwalker. They appear mainly in Newcomer's Bridge and Quest Hubs, and generally give Seekers information and quests related to their progression through the Track of the Ancients.