The Old Hedgehag is an organic enemy in CrossCode. It can be encountered in Autumn's Rise and Bergen Trail.

The Old Hedgehag is a small, four-legged creature with dark grey skin and a back covered in bright red spines. It varies in appearance from the normal Hedgehag only by the color of its spikes.

While they are much stronger than the basic Hedgehag, Old Hedgehags behave similarly to them, although they have an additional attack. Once engaged in combat, Old Hedgehags will attempt to follow and swarm their target. They will sometimes use a spinning dash attack, in which they roll straight at their target (this can be blocked), and other times a jump attack, in which they jump into the air and try to land on them (this cannot be blocked by a normal guard). Both attacks are led by a brief period of spinning (and bouncing, in the case of the jump attack) during which the Old Hedgehag takes reduced damage. They are able to jump in a similar way as Lea in case they need to pursue a target at an higher altitude. Perfect Guarding their direct attack will briefly stun them and cause them to take increased damage. 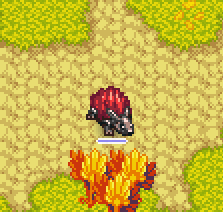 While one or two Hedgehags can be easily pinned down and dispatched with Melee attacks, their main danger lies in large groups, where Hedgehags at the back of the group can stay hidden from your attacks and attack through the crowd. For this reason, hit and run tactics may be useful in these cases. Use area-of-effect combat arts or some melee on a group of Hedgehags when it is safe to do so, then dodge or run away, getting some distace, and repeat. Alternatively, just keep the distance and shoot them without ever getting close. In some places, it is also possible to lead Hedgehags into following you across water, and then hit them with Balls in mid-jump, knocking them into the water and damaging them.

When paired with other enemies, Hedgehags should be dealt with first, as they require no special tactics to defeat and their aggressive following will often lead them in front of the other enemies. This same good following ability makes them an excellent choice to lead between groups of foes when trying to obtain a high combat ranking.

Avoid trying to parry their attacks, as the timing is very precise, making the effort rarely worth it.

The Old Hedgehag was introduced along with Autumn's Rise in the first version of the Demo. It has appeared in all subsequent versions of the game except the Shortened Demo.