An uncompleted part of CrossWorlds hidden inside Sapphire Ridge.

The Old Hideout is a location in CrossWorlds. Thematically, it is part of Sapphire Ridge, but it is not open to Avatars, and has therefore fallen into disrepair. The hidden facility located here was seen in Lea's memories as a base of operations for unknown purposes, and it is ultimately where Satoshi completes his life's work and dies. This is the area where Shizuka is playable during the prologue.

The area is very linear, with a long path leading to a single large building where Satoshi is kept. 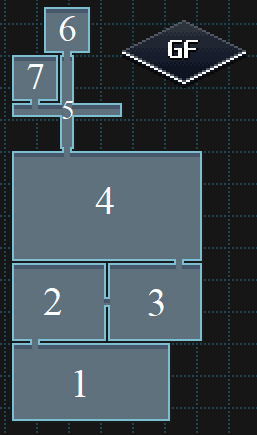 All enemies in the Old Hideout are plot-relevant and do not respawn.

During the events of A New Home, after completing the Ku'lero Temple, Shizuka can be found under the tree on the island in the north-east lake in Upper Path, where she gives Lea the PvP vs Shizuka Custom Cup.

The Old Hideout is an unfinished area of Sapphire Ridge that Sidwell managed to obtain for the Evotar interrogation project. Eventually, the project moved to the larger Vermillion Wasteland, but Satoshi continued to work in the area.

During the prologue, two years before the start of CrossCode, Shizuka hurries through the Old Hideout to find Satoshi, with Gautham trying and failing to stop her. When she reaches Satoshi, he completes his final task, later revealed to be the creation of an Evotar of himself, before collapsing from his heart condition. He tells Shizuka that she needs to get away, and then dies.

Much later, Lea, after traversing much of CrossWorlds, finds the hidden entrance to the Old Hideout and manages to unlock it using Shizuka's memories and Sergey's assistance. She is quickly confronted by Shizuka, who refuses to let her pass and duels her repeatedly until finally Satoshi intervenes. He reveals to Lea and Sergey the whole truth about the Evotar interrogation program and how Lea might offer them a chance to escape it. Lea then reconciles with Shizuka while Sergey and Satoshi make plans for how to recover the Evotar Server.

A bit later, Lea returns to the Old Hideout, and they discuss the plan to storm Vermillion Wasteland. Lea logs out for the night, and then leaves the next day to set the plan in motion.

At the very end of the game, Lea and her friends all gather at the Old Hideout, where Lea says goodbye to them and logs off.