The Rhombus Enforcer 1.0 is a mechanical enemy in CrossWorlds. It can be found in Carla's training course on the MS Solar, as well as in the Rhombus Dungeon.

The Rhombus Enforcer 1.0 is a small, pill-shaped robot that appears to be floating. Its core is white, with a prominent blue stripe, a short blue antenna and a red eye on it. It is surrounded by a blue and silver ring.

Enforcers will slowly follow the player around, staying close to them but not willingly going within melee range. Its attack is indicated by it briefly turning dull red, after which it dashes through the player, damaging them. The attack is vulnerable to disruption, both by charged Balls and by Melee. 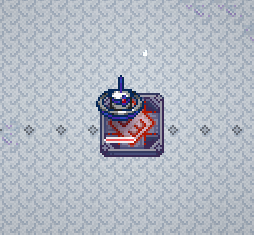 Due to the ease with which their attacks can be disrupted, Enforcers are generally only challenging in large numbers. In those cases, as well as when fought together with Rhombus Enforcer 2.0s, it is important to avoid getting surrounded by them. Focus attacks on the Enforcers at the edge of the group, as well as those preparing to attack. If you have health to spare, you may want to get in the mix and use some melee too.

Rhombus Enforcer 1.0s were first introduced in the TechDemo++ as a weaker variation on the Rhombus Enforcer 2.0, which many beginning players were finding to be overly difficult. They have appeared in all subsequent releases of the game.